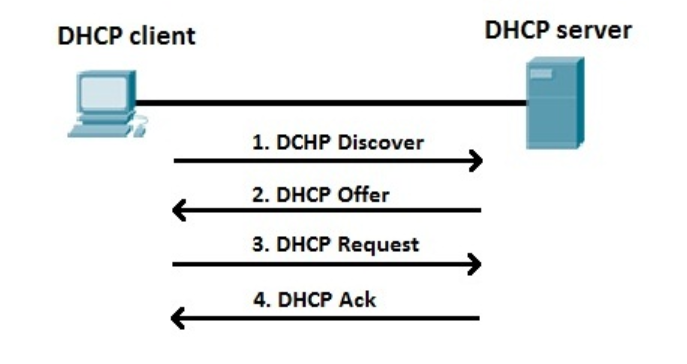 Dynamic Host Configuration Protocol (DHCP) is a service that allows devices to automatically distribute / assign IP addresses to hosts in a network. How it works, the DHCP Server will respond to requests sent by the DHCP Client.

In addition to the DHCP IP address, it is also capable of distributing a gateway netmask information, configuring DNS and NTP servers and many more custom options (depending on whether a dhcp-client is supported or not).

Mikrotik can also be used as a DHCP client or DHCP server and can also be used both. one example we subscribe to the internet from provider A. provider A does not provide static information and must be installed on our device, but will provide an IP automatically through the DHCP process.

The way DHCP works on Mikrotik is divided into two architectures, the first is the DHCP server and the second is the DHCP Client for explanation in the article below:

DHCP server. This DHCP server is a network tool that provides IP Address, DNS, default gateway and some other information such as TCP / IP, NTP so that the client computer requesting DHCP can communicate. There are several types of Operating Systems that can or provide the first DHCP server service, namely: Windows NT, Server, Windows 7, Windows 8, Windows 10, GNU Linux, Mac OS and other Linux.

In order to get an IP address from the internet service provider that you use and be able to connect to the internet, you must use a feature called the DHCP client, how to set it as below.

First, in order to create a DHCP client, then Mikrotik in the left menu is the IP menu → then select the DHCP client --> then after that a new pop-up will appear from the DHCP client. then click the (+) add button. after that select the interface that will be done to overcome the DHCP client (in this case I use the wlan 1 interface, one don't forget to check Use peer DNS, Use peer NTP and also add Default Route (Select the 'yes' menu)). Then click apply and ok. 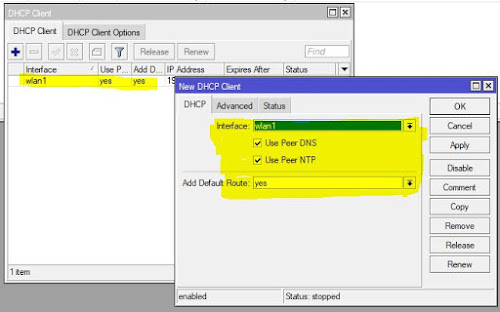 There are several parameters that can be adjusted according to the needs of your network;

Yes, that's all I can give Share Tips Setting IP DHCP Client on Mikrotik Router, maybe I will share a tutorial on how to set up a DHCP server on a proxy router. Okay, thank you. Don't forget to bookmark this website and visit this website, if you have questions, please write in the comments column. Ok see you next time and next post .